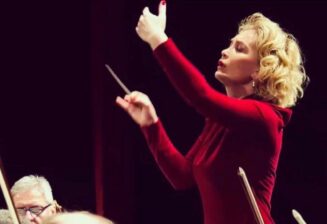 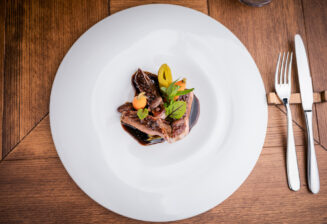 #Blog
Chef Cristian Lai. Cooking is not a job for everyo... 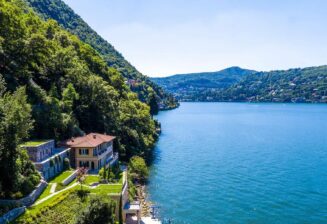 He arrived there in September 1918, convalescing. Stresa welcomed him beneficently after a series of surgeries young Ernest had to undergo.

He had been wounded in a bombing raid while serving as a volunteer with the Red Cross.

He underwent twelve surgeries to extract more than two hundred shrapnel embedded in his leg.

Hemingway was captivated by the beauty of the lake landscape, which so evoked his native lands that he photographed them in his essential and concise narrative.

In A Farewall to Arms, Farewell to Arms, there are pages of love for the Verbano Pearl.

Invaluable is the literary and tourist value, of those lines of prose with poetic flavor.

I walked towards the Iles Borromées, with my suitcase, in the rain. I saw a carriage and signaled to the coachman, because it was better than arriving by carriage. We stopped after crossing the garden, the porter came out with an umbrella and was very kind. He accompanied me to a beautiful room, very large, with windows overlooking the lake. Heavy clouds stood over the lake but with the sun I knew it would be wonderful.

The detailed descriptions, etched in Hemingway’s pages, are evidence of the deep knowledge of these places, ideal for quiet and artistic inspiration.

He mentions Isolabella and the walls that drop steeply into the deep lake, Fishermen’s Island and the dark, smooth, very cold water.

We could not catch a single fish although, at times, the circles on the water warned of their presence.

Stresa, its hills, its surroundings set between water and rock, remained in his heart.

He often met Arnoldo Mondadori, at Villa Verbanella in Meina.

The writer was at home on Lake Maggiore, he was an old client, as he signed his name in the guest book.

An old client who, even today, has dedicated places.

The suite 106 that housed him bears his name, is on the second floor of the Art Nouveau building, and is coveted by wealthy clients.

The unparalleled literary quotation has made universal these territories that have a strong appeal for a wide variety of tourist needs, from cultural tourists, to sports tourists, to those seeking relaxation and wellness.

No one remains indifferent to the beauty of the area, in Stresa or Verbania, on the opposite shore, behind Pallanza, on an edge of the Lake.

In Pallanza also the houses are beautiful and with the boat you can go to the islands where the fishermen live, there is a restaurant in the biggest one.

We, at BARNES Como, believe in the exclusivity of this area linked to world culture and literature, and we have focused on the possibility of recovering some important properties.

In Verbania, for example, the Ex Colonia Ettore Motta is now convertible into tourist accommodation.

The substantial building facility is for sale here. It occupies a suburban area that alternates terraces with wooded tracts. The position is dominant over the Borromeo Gulf, the extent of the park, the morphology, the location and the complex, are exclusive characteristics.

The lot enjoys a spectacular view of the entire Borromeo Gulf, and all the territories mentioned by Hemingway.

It gives on the Piedmontese side with its delightful Isola Bella, Isola Madre and Isola Superiore or Dei Pescatori. On a glimpse of the Lombard shore. On the branches of the lake stretching north toward Switzerland and south toward the Ticino valley.

Past Luino, Cannero, Cannobio and Tranzano,” he said, “he will not be in Switzerland until he reaches Brissago. He must pass Mount Tamara.

I pointed to the left oar and went ashore, turned the boat so that it was parallel to the shore, withdrew the oars, secured the chain to the ring and jumped onto the wet stone of the shore. I was in Switzerland.

In agreement with the city administration, the current ownership has drawn up a plan for the rehabilitation of the buildings. An expansion of the volume is possible. The intervention, consistent with the master plan, involves conversion from a colony to a tourist village. This is in line with the development of the area and the historical building heritage.

The redevelopment plan even offers the possibility of building a direct access underpass to the lake.

Please contact us for any other information or to conduct an on-site inspection.